History of the promised land in the Bible:

The “Promised Land”, also known as “The Land Of Milk And Honey”, is the land which God promised to:

The promise to Abraham said,

“8 On that day the Lord made a covenant with Abram and said, “To your descendants I give this land, from the Wadi (River) of Egypt to the great river, the Euphrates— 19 the land of the Kenites, Kenizzites, Kadmonites, 20 Hittites, Perizzites, Rephaites, 21 Amorites, Canaanites, Girgashites and Jebusites.”

This promise was for Abraham’s descendants:

12 As the sun was setting, Abram fell into a deep sleep, and a thick and dreadful darkness came over him. 13 Then the Lord said to him, “Know for certain that for four hundred years your descendants will be strangers in a country not their own and that they will be enslaved and mistreated there. 14 But I will punish the nation they serve as slaves, and afterward they will come out with great possessions. 15 You, however, will go to your ancestors in peace and be buried at a good old age. 16 In the fourth generation your descendants will come back here, for the sin of the Amorites has not yet reached its full measure.”

The promise was fulfilled as the Israelites were enslaved by the Egyptions and freed after 400 years.

The Israelites did not conquer  from the Nile (River of Egypt) to the Euphrates – but a smaller area.  Moses had anticipated this – realising the only way the Israelites were going to get the whole of the promised land was if they stayed obedient. In Deut 19:8-9 he makes this statement:

If the Lord your God enlarges your territory, as he promised on oath to your ancestors, and gives you the whole land he promised them, because you carefully follow all these laws I command you today—to love the Lord your God and to walk always in obedience to him—then you are to set aside three more cities.

Historically the largest territory held by the Israelites was under King David. 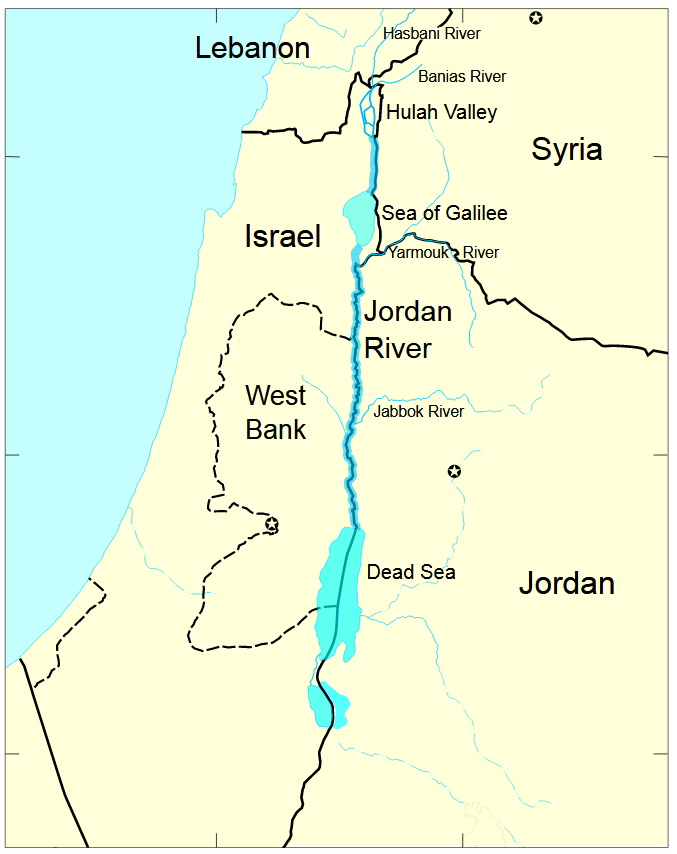 Psalm 133:3 says, ““It is as if the dew of Hermon were falling on Mount Zion.  For there the LORD bestows His blessing, even life for-evermore.” – NIV

The Psalm refers to the notable amount of water that falls on Mount Hermon. The Jordan River has its major source at Mount Hermon, in northern Israel.

The Jordan’s Hebraic name is Yarden  (which means descender) and it descends from Mount Hermon (200 metres), flowing south through the Sea Of Galilee, exiting out the other side.

The river then flows south, descending, finishing 420 metres below sea level emptying into the Dead Sea.

The Jordan River is Israel’s primary water source, in much the same way the Nile is vitally important to Egypt. It provides water for drinking and agriculture along much of Israel.

A drought in the Jordan affects all Israel and floods are catastrophic.  Every year the Jordan rises as the snow melts off the mountains and spring rains fill it.

The over flowing water is both impassible and a source of life, setting up the surrounding land for planting crops.

What size was the Jordan River when it was being crossed? 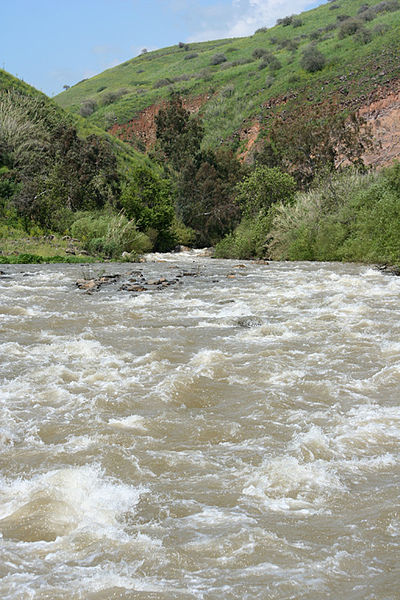 Joshua 3:15 states that the Jordan River was overflowing its banks due to the harvest season.

The Jordan is normally 30m wide at the place Israel crossed the Jordan River but in flood it overflowed its banks. Normally it was 1 – 3m deep, which would have made crossing difficult for most people even without flooding.

Owing to the steep drop of the Jordan River the river is turbulent and fast.

In 1854 an expert swimmer was unable to make it across the river near Jericho because the river was too wide and the current too strong.

We do not know how wide the river was as the bible doesn’t tell us. The depth would have been deeper than 1-3m, it would have been wider than 30m (the flood plane is as wide as 600m in places).  Crossing a fast flowing river in flood would have been very difficult and dangerous. Add into that the number of people and cattle etc and it would have killed many many people to attempt to cross there.

It must have been a reasonable size as the people crossed the river with no recorded fights – which there would have been at other times of the year because it was an entrance to Jericho and would have been guarded. it is likely there were no guards as the river was considered uncrossable.

The Bible does record the river dried up for about 32km when the feet of the priests touched it. This is the miracle – to focus on.