Israel has conquered most of Canaan and has settled the tribes into their allotted territories.  The United Kingdom has an expanded area, the divided kingdom has a reduced area. As of 722BC the Northern Kingdom and portions of the Southern kingdom are conquered and in 586BC the land is completely conquered by the Babylonians. 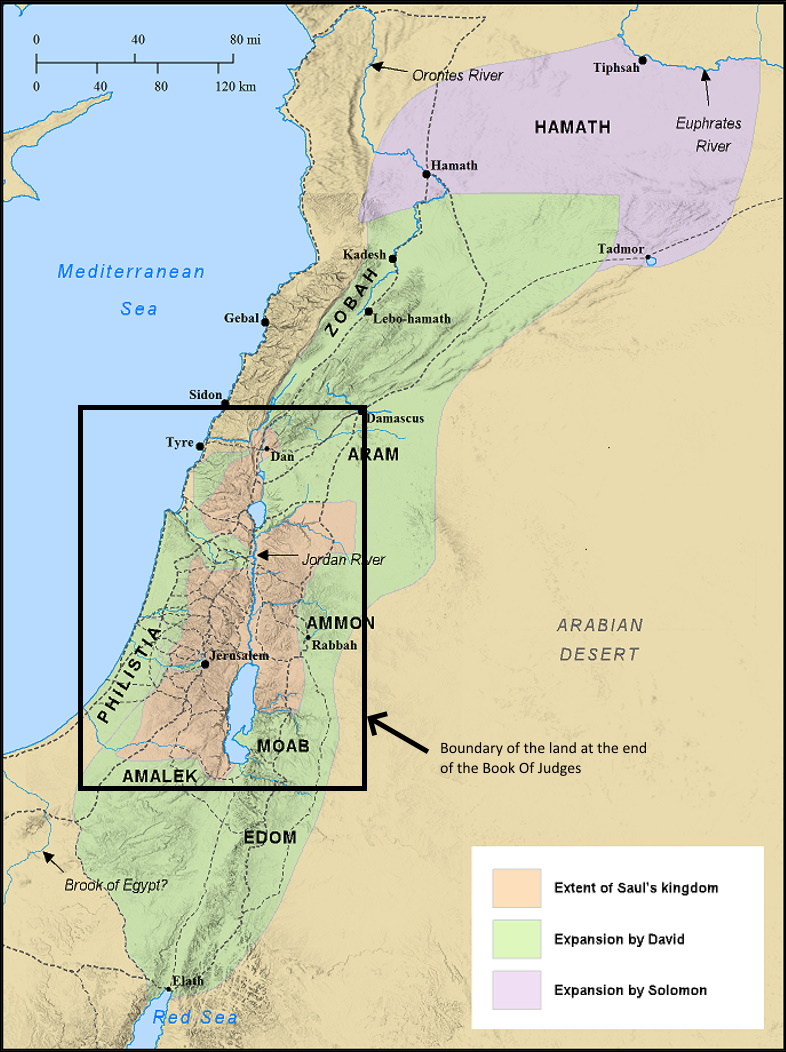 The Book Of Judges ends by saying :

Judges 21:  24 At that time the Israelites left that place and went home to their tribes and clans, each to his own inheritance.  25 In those days Israel had no king; everyone did as they saw fit.

Through the time of Judges the Hebrew people, the descendants of Abraham, are living in the land of Canaan (promised land). Each tribal group, based on the 12 sons of Israel, have a tribal territory which their family rules.  However there is no uniting leader – other than the judges whom God raises up from time to time. There is no single ruler, no consistent leadership across the tribes and each tribe does as it sees best.

God gets Samuel to anoint David, the youngest child of a family – a keeper of sheep – to be king. This anointing happens while Saul is still king.  Saul tries to kill David, who escapes and refuses to act dishonourably against Saul. Eventually Saul dies and David is made King.

Solomon David’s son, is made king.

As a result of Solomon’s drifting away from God a civil war erupts after his death.

This is in line with God’s judgement on Solomon for following idols and not following His commands:

So the Lord became angry with Solomon because his heart had turned from the Lord God of Israel … Therefore the Lord said to Solomon, “Because you have done this, and have not kept My covenant and My statutes, which I have commanded you, I will surely tear the kingdom away from you and give it to your servant. Nevertheless, I will not do it in your days, for the sake of your father David; I will tear it out of the hand of your son.”

Jeroboam, a superintendent of works (civil servant), leads a rebellion when Rehoboam (David’s grandson / Solomons son) comes to the throne. This in part is because of:

This split is never resolved.

The Northern Kingdom had 19 kings across 9 different dynasties throughout its approximately 208 years of existence.

Every king of Israel is unrighteous and so God raises up Assyria to conquer the northern kingdom (786 BC ).

The unrighteous kingdom is never restored.

Dates are approximate except the two exiles which are accurate to within about a year. This is because of the way time was recorded and events dated in older manuscripts.