Jesus comes in fulfilment of the Old Testament prophesies of a saviour and offers salvation and the true kingdom of God. While some accept Him, most reject Him, and He is crucified, buried and resurrected.
Read More:

Judah ceased to exist as an independent state after the Roman conquest of 63BC.  Judah became the Roman province of Palestine. It includes the Roman provinces of Galilee, Samaria, and Judea which effectively cover the same areas as Judah / Israel.

The Romans ruled Judea with the same efficiency with which they ruled the other Roman provinces.  The resources of the province were ruthlessly exploited for the glory and wealth of Rome.  Rome had established an Idumean named Herod as King of Judea and he had successfully, if brutally, ruled the province since 37BC.

See 10.1 Jesus Details for a detailed map of the area he ministered in and also the Jerusalem of His day 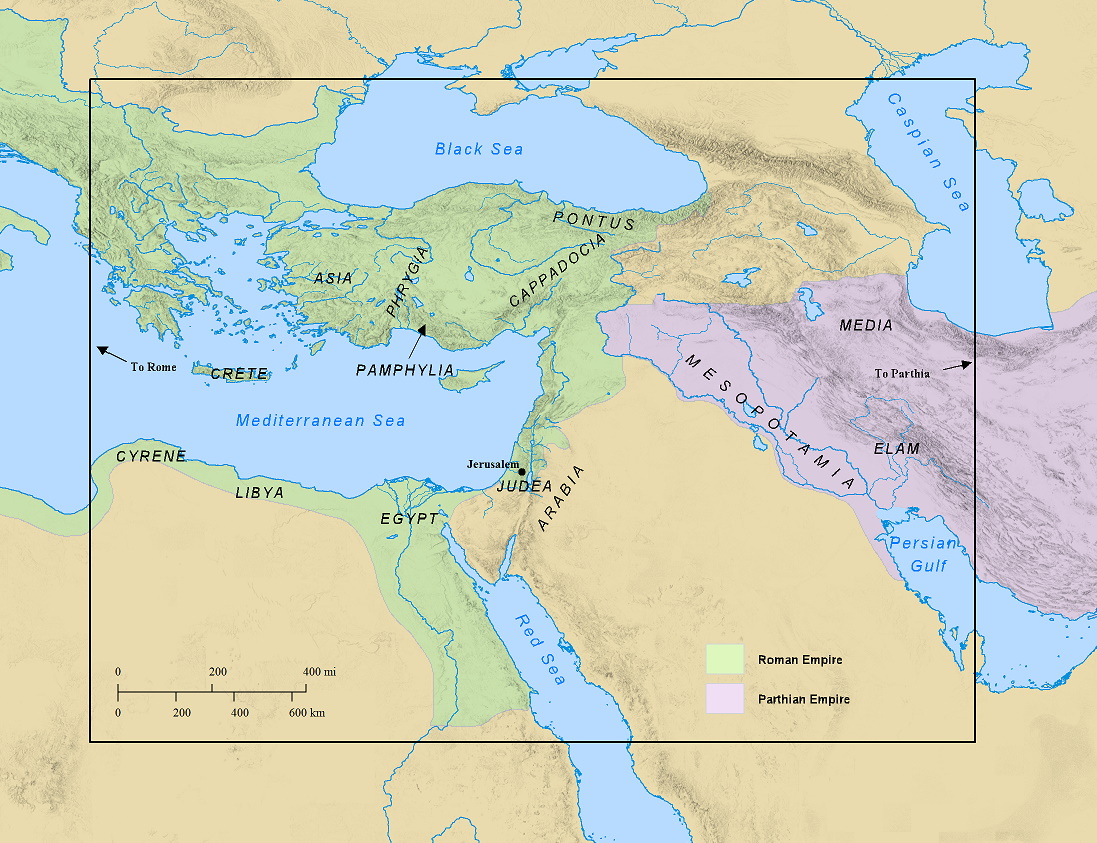 They also faithfully studied the Scriptures in their Synagogues, especially the final prophecies of Yahweh’s last holy prophet, the Prophet Malachi who promised “Look, I shall send my messenger to clear a way before me.  And suddenly the Lord whom you seek will come to his Temple; yes, the angel of the covenant for whom you long, is on his way…” [Malachi 3:1] and “Look, I shall send you the prophet Elijah before the great and awesome Day of Yahweh comes.  He will reconcile parents to their children and children to their parents, to forestall my putting the country under the curse of destruction.” [Malachi 3:23]. With great expectations they watched for the coming of Elijah and awaited his announcement of the Messiah.

Through a miraculous conception by the Holy Spirit, Jesus is born of the Virgin Mary in Bethlehem of Judea. After a brief excursion into Egypt to save Him from Herod’s attempt on His life, Jesus travels with Mary and her husband Joseph to live in Nazareth. There He learns the trade of a carpenter and apparently lives a fairly normal life from childhood to the time of His baptism, when He is thirty years old.

His cousin, John the Baptist, is ministering and baptizing people in the Jordan River near the Dead Sea. After Jesus is baptized by John, a remarkable event takes place. God the Father is heard speaking from heaven, saying, “This is My beloved Son, in whom I am well pleased,” and the Holy Spirit, in the visible form of a dove, descends on Him.

Then He is led by the Holy Spirit into the wilderness of Judea, where He is tempted by Satan for forty days. Satan makes every attempt to get Jesus to follow him rather than God. Satan offers Jesus everything God the Father offers Him, but on a different timetable and with different requirements. Jesus remains sinless and validates His readiness to begin making Himself known as the Messiah.

Even though the Romans allowed Judea’s citizens to freely practice their religion, the Jews of Judah began to long for the promised Messiah and looked for the promised signs to be fulfilled.  There is little doubt that first century AD Jews were expectantly looking for the advent of the Messiah.  There were a number of factors that led religious Jews to believe the coming of the Messiah was eminent.  First was the prophecy of the 70 weeks of years made to the prophet Daniel in Daniel chapter 9 (490 years) as a time period to be fulfilled before the coming of the

“Anointed One” was completed. Then too, the Jews had calculated that there were 2,000 years from Adam to Abraham and one thousand years from Abraham to David’s conquest of Jerusalem and now another 1000 years had passed since David had established Jerusalem as the City of God!  The time was ripe and the people were expecting the Anointed One to come as a Prophet like Moses, a Priest like Phinehas, and a King like David to free them from their Roman oppressors.

It is not until after Jesus’ baptism and temptation that He begins His public ministry.

His message has a two-fold focus.

He validates His message by performing astounding miracles, and the signs of initial acceptance by the crowds are encouraging. Much of this early activity takes place around Jerusalem.

Jesus’ initial popularity does not last. The religious leaders are profoundly jealous of Him and begin stirring up animosity toward Him.

This growing rejection results in a progression in Jesus’ ministry pattern. He begins to focus more attention on the mounting opposition from the religious leaders, warning them of the seriousness of their attitude. At the same time, He begins setting aside more and more time for the twelve disciples whom He has chosen, preparing them to carry on without Him.

He also begins challenging the multitude to count the cost of following Him. Though Jesus travels quite a bit during this time, His home base is Capernaum, on the north bank of the Sea of Galilee.

The Jews become more and more polarized about Jesus, either following Him enthusiastically or resenting Him deeply.

In the volatile atmosphere of the festival time of the Passover when Jesus and many other Jews are in Jerusalem, the religious leaders are finally able to stir up enthusiasm for Jesus’ crucifixion. They subject Him to a series of mock trials on false charges.

Then Jesus is crucified on Friday, buried that night, and rises again from the dead on Sunday, after being in the tomb three days.