Joshua leads the conquest of the promised land
Read More:

The Israelites camped to the East of the Jordan River, opposite Jericho. They cross the Jordan River, and proceed to spend the next 55 years conquering the land of Canaan, from Tyre in the North to Debir in the South.

The land was divided into eleven tribal areas (as the Levites had no land because God was their reward). 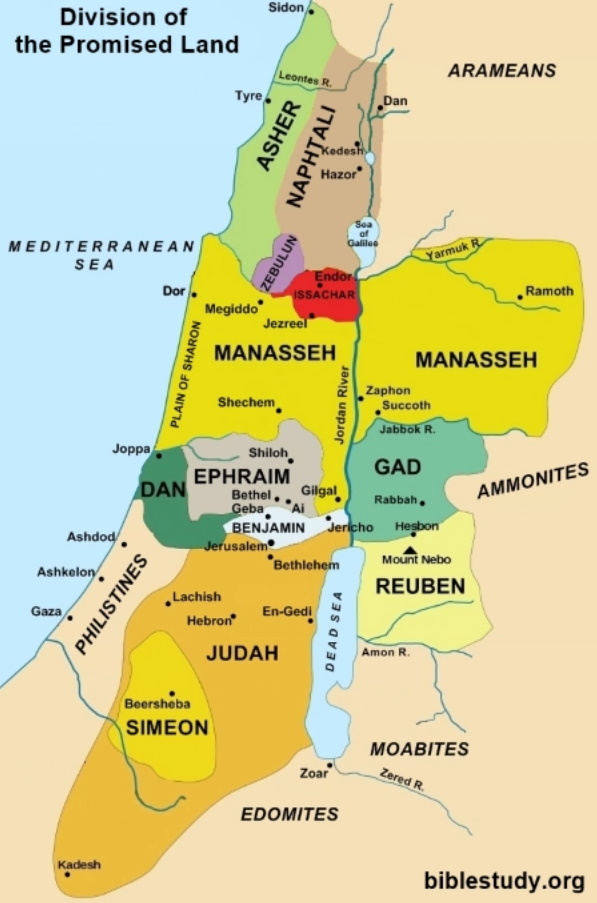 Moses is dead, having followed God and leading the Israelites to camp across he Jordan River from the city of Jericho. Joshua, his successor, with the Israelites faces the same test from 38 years ago. Would they trust God, follow Joshua and enter the promised land or wander again.

Joshua’s first challenge is to cross the Jordan River. Now the Israelites could have travelled 50km south, gone around the Dead Sea and come up the opposite side of the Jordan River (which is currently in heavy flood) but God wants to see if they will trust and obey.

God tells Joshua to get the people into marching order and with the priests (and Ark of God) in front go towards the Jordan River. When they touched it God would part it as he had the Red Sea with Moses. Now this may not seem like much of a test, but with approximately 2.5 million people marching forward, stopping if things went wrong was not an option.

As the priests toes touched the water God dried up the river for approximately 3o km (20 miles). The Israelites crossed over on dry ground and built a monument to God there. After they cross the water starts to flow again.

The people of Israel now have the Jordan River (in flood) behind them and the city of Jericho in front of them. It was a fortified city, with walls so thick two chariots could race around the walls side by side. it was one of the gate way cities into the land of Canaan and as such was heavily armed and fortified.

If the people of Israel fight against the city, and lose, they have no escape. God commands them forward to take the city and gives them instructions.

For six days they are to march around the city – once – silently.

On the seventh day they are to march around the city seven times and on the seventh time the people are to shout. When they do this God would make the walls fall down.

The people of Israel obey, the walls come down and they conquer Jericho – a miraculous conquest of a city.

The Israelites proceed to conquer the land of Canaan one city at a time. The land was not ruled by one king but by a number of city state kings (kings who ruled one city or a small area) .  The Israelites conquer cities all through the middle of the country then, having split the country in half, conquer it from South to North.

God’s instructions regarding the cities and the people were to destroy the people from the land and to not make treaties with them. After 7 years the land is under the control of the Israelites – but not all the cities and areas are conquered. God’s plan is not to give it to them all in one go but for them to fight and earn the land, so they would grow strong and trusting.

The 12 tribes of Israel are each given part of the land, chosen by lot. They split up into their family groups and start the process of removing the last of the Canaanite from the land. The Israelites no longer have a central leader / king but are operating as individual tribes, each co-operating with the others as members of the wider family of Abraham, Isaac and Jacob.

Unfortunately they fail to remove all the people from the land, make treaties with some and allow them to continue to live amongst them. This was something God had specifically warned them not to do – as the people of Canaan would corrupt the Israelites. We see the seeds of behaviours and problems that continue through the rest of Israel’s history.

The land is settled and becomes known as the land of Israel (as well as Canaan). The people have inherited the promised land as God had sworn to Abraham

The patterns in Joshua show the people of Israel trusting God, disobeying God, partially obeying God and doin things their own way at times, as well as turning back towards God. There are patterns that continue through the rest of Israel’s history.

We also see the influence of the Canaanites, who worshipped other gods and whose pratices were detestable, corrupting the Israelite nation.