Daniel gives leadership and encourages faithfulness amongst the exiles for the next 70 years
Read More:

The location of this section moves from The Promised Land / Canaan to Assyria and Babylonia. 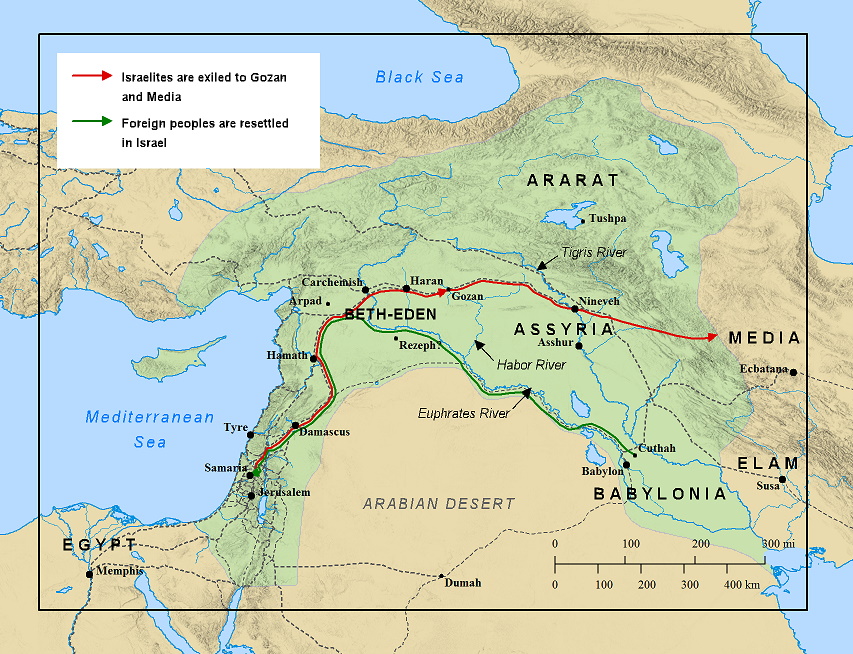 In 722 B.C the Northern Kingdom  (Israel) fell – conquered by the Assyrian army.  Jeremiah, the prophet prophesies that Judah will be taken into captivity at the hand of the Babylonians. He also prophesies the captivity will last 70 years.

Judah refuses to listen and, despite being blessed by God under Godly kings, continues to return to idolatry and sin.

25 The word that came to Jeremiah concerning all the people of Judah, in the fourth year of King Jehoiakim son of Josiah of Judah (that was the first year of King Nebuchadrezzar of Babylon), 2 which the prophet Jeremiah spoke to all the people of Judah and all the inhabitants of Jerusalem: 3 For twenty-three years, from the thirteenth year of King Josiah son of Amon of Judah, to this day, the word of the Lord has come to me, and I have spoken persistently to you, but you have not listened. 4 And though the Lord persistently sent you all his servants the prophets, you have neither listened nor inclined your ears to hear 5 when they said, “Turn now, every one of you, from your evil way and wicked doings, and you will remain upon the land that the Lord has given to you and your ancestors from of old and forever; 6 do not go after other gods to serve and worship them, and do not provoke me to anger with the work of your hands. Then I will do you no harm.” 7 Yet you did not listen to me, says the Lord, and so you have provoked me to anger with the work of your hands to your own harm.

8 Therefore thus says the Lord of hosts: Because you have not obeyed my words, 9 I am going to send for all the tribes of the north, says the Lord, even for King Nebuchadrezzar of Babylon, my servant, and I will bring them against this land and its inhabitants, and against all these nations around; I will utterly destroy them, and make them an object of horror and of hissing, and an everlasting disgrace.

See also the Book Of Habukuk. : It is only three chapters long but is a simple overview of what is about to happen to Judah.

Daniel has a number of prophesies but one of the ‘most important’ was the encouragement from God that He would return he exiles after 70 years as promised by Jeremiah.

Daniel 9 In the first year of Darius son of Xerxes[a] (a Mede by descent), who was made ruler over the Babylonian[b] kingdom— 2 in the first year of his reign, I, Daniel, understood from the Scriptures, according to the word of the Lord given to Jeremiah the prophet, that the desolation of Jerusalem would last seventy years. 3 So I turned to the Lord God and pleaded with him in prayer and petition, in fasting, and in sackcloth and ashes.

There are also other events mentioned in the Book Of Daniel that encouraged faithfulness and show God has not abandoned them. The story of Shadrach, Meshach, and Abednego, refusing to bow down to idols, and also being saved by God encouraged the exiles to be faithful.

Other stories of faithfulness during this time are the Book Of Esther who risked her life to save the Jewish people from being destroyed.

One example of this is the story of Daniel, Hananiah, Mishael and Azariah who were captives from Judah. We know thme better as Daniel , Shadrach, Meshach and Abednego. They were trained in the Assyrian ways for three years, encouraged to eat food offered to idols and were renamed, from their Jewish names to names of Babylonian gods, the  names we know them by now.

Daniel 1 : Then the king ordered Ashpenaz, chief of his court officials, to bring into the king’s service some of the Israelites from the royal family and the nobility— 4 young men without any physical defect, handsome, showing aptitude for every kind of learning, well informed, quick to understand, and qualified to serve in the king’s palace. He was to teach them the language and literature of the Babylonians. 5 The king assigned them a daily amount of food and wine from the king’s table. They were to be trained for three years, and after that they were to enter the king’s service.

6 Among those who were chosen were some from Judah: Daniel, Hananiah, Mishael and Azariah. 7 The chief official gave them new names: to Daniel, the name Belteshazzar; to Hananiah, Shadrach; to Mishael, Meshach; and to Azariah, Abednego.

Further assimilation is shown in the Book of Esther where we see a Jewish woman, Esther, becoming the Babylonian King’s Queen, her uncle acting as royal servants and a series of events centered around the refusal of the Jewish people to bow down to idols and worship the king.

The Jews in exile did take up language and some customs but faithfully refused others.

It is worth noting that in the Book Of Daniel we see different kings learning about the one true God and either responding positively towards him or resisting him and themselves being judged.

This period is one of great power changes.

The Assyrians captured Israel but are taken over by the Babylonians.

The Babylonians last about 70 years and then Persia rises to become a dominant power and conquers the Babylonians.

This is in fulfilment of the prophesies of Daniel and and Habukuk Chapter 2 amongst others.

These changes alter who is in power but it is worth noting that the Jewish people have strong influence at this time as shown in Daniel and Esther amongst other books.