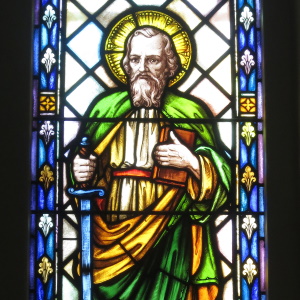 Acts 8:1-3       Saul leads a violent persecution of the young Christian church in Jerusalem. He goes from house to house, dragging men and women off to prison. When believers are found guilty of what is considered to be ‘blasphemy’, Saul calls for them to be stoned to death (see Acts 26:10).

Just before reaching Damascus, the risen Lord Jesus appears to Saul – who falls to the ground blinded. He is led by the hand into the city, and spends three days neither eating nor drinking.

Acts 9:10-22   Ananias – a disciple living in Damascus – has a vision of the Lord Jesus who tells him to go to Saul. Ananias has heard of Saul’s reputation and objects, but the Lord says, “Go! I have chosen Saul for an important work. He must tell about me to those who are not Jews, to kings, and to the people of Israel” (Acts 9:15).

So Ananias goes to the house of Judas on Straight Street – still the main thoroughfare in the old city of Damascus today – and finds Saul. He prays that Saul will be filled with the Holy Spirit.

Immediately, Saul is changed. Something like scales fall from Saul’s eyes and he can see again. He is baptised and, on regaining his strength, he begins at once to teach in the Jewish synagogues of Damascus that Jesus is the Son of God – the promised Messiah or Christ.