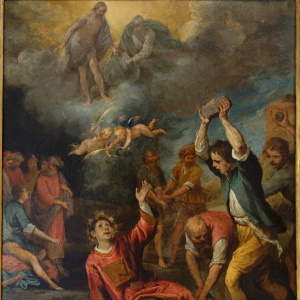 Christian deacon in Jerusalem and the first Christian martyr

His defense of his faith before the rabbinic court enraged his Jewish audience, and he was taken out of the city and stoned to death.

His final words, a prayer of forgiveness for his attackers (Acts of the Apostles 7:60), echo those of Jesus on the cross (Luke 23:34).